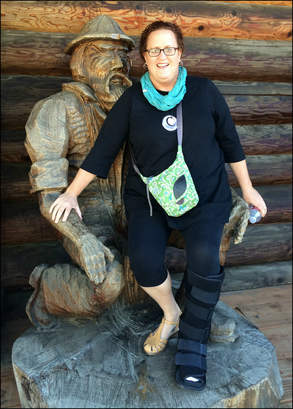 I was born and raised in Las Vegas, Nevada — one of a rare breed, the native Nevadan. No, I never lived in a hotel/casino, but Siegfried and Roy did bring a tiger to my house. The big cat sat on the patio while the two entertainers talked with my dad about the current illusion he was building for their show. Oddly enough, I remember being fascinated with their accents and vowed that someday I would travel to Germany, where I imagined everyone sounded like the magicians. A few years later, my family visited Disneyland to see a “giant turkey float” my father built for the Bi-Centennial parade down Main Street Disney. After the parade, I rode “It’s a Small World” and I decided I didn’t just want to go to Germany anymore – I wanted to go everywhere. While I still haven’t been everywhere, I’ve been around the world, thanks in large part to my involvement with and my love of geography.

My understanding of geography as a field started at the Clark County Public Library. Not in a book, but in a conversation with a co-worker. I was a fourteen-year-old high school freshman, and I had been hired to shelve books. One of my fellow workers was a college student named Herb Thompson who was studying to become a geography teacher. Herb and I would strike up a lifelong friendship, and he would help foster in me a passion for geography that would shape my life in ways I could never have imagined.

After graduating from high school, I went north to study History and Secondary Education at the University of Nevada, Reno. It was there that I took my first geography class, received a degree in History, and learned how to open beer bottles with my toes.  Upon graduation I came back to Southern Nevada, where I worked on an MA in special education at UNLV while substitute teaching. From time to time I would sub in Herb’s eighth grade geography class. Herb introduced me to Bob Amblad, who was the co-coordinator of a fledgling organization called the Geographic Alliance in Nevada, or GAIN for short. Bob and Herb were unrelenting in their quest to convince me, and everyone else, to take part in GAIN. Despite the fact that I was not a geography teacher, and in fact was teaching special education science classes, I finally gave in to their badgering and, in 1997, became a member of GAIN. It was, without question, the best decision of my entire life.

As a member of my Alliance, I had the chance to embrace travel in a way I could never have done otherwise. I have had the chance to travel around the great state of Nevada – visiting small towns and mining parks. We visited historic sites like Donner Pass and rode the steam train in Ely, Nevada. Further afield, I sailed on the SS Universe Explorer up the inner passage from Vancouver to Skagway, taking geography classes from Chris Ryan, currently the coordinator of GAIN, and our original coordinator Gary Hausladen, as we sailed. I learned about urban geography in San Francisco. I wandered the streets of Washington DC and ate my way through Portland, Oregon–all due to GAIN activities.

It was through GAIN that I was introduced to NCGE. Our coordinators (by now Herb had taken over for the retired Bob) had been attending, and Herb felt that GAIN members would enjoy attending a quality conference hosted by a professional organization. My first NCGE conference was in Salt Lake City. I wish I could say I loved every single thing about that conference, but while I loved the keynote speaker, the sessions and the chance to meet other geographers, the thing we all remember the most are the terrible beds. I slept in a hammock in the Peruvian Amazon that was more supportive than that bed. However, soft mattress aside, I knew that NCGE was an organization that I would belong to for a long time to come. Since then, I have attended numerous NCGE conferences, including Denver and Washington. I was supposed to present in Memphis, but an emergency appendectomy just hours before my flight kept me from attending, despite my best efforts to persuade the doctors to allow me to leave the hospital and get on a plane. My nurse actually said, “I’ve never heard of someone so upset about missing a conference. It must be pretty special.”

It was at the NCGE conference in San Marcos that I had the opportunity to meet my idol, Harm De Blij. I was standing in the exhibit hall talking with the Wiley representative about how much I enjoyed using the Fouberg, Murphy and De Blij text from his company when out of the blue, he asked if I would like to attend a dinner honoring Harm De Blij. Would I? Would I?! That night I was star-struck! I’ve met movie stars and famous singers, but I was never so nervous as I was to meet the author of my favorite book “The Power of Place.”   Harm was such an intelligent, thoughtful and genuine person. The conversation centered around wine, travel and the importance of enjoying life. I’ve rarely enjoyed an evening more.

Not only did I have the chance to meet my idol, but NCGE has also offered me the opportunity to meet many amazing geographers who have made a profound difference in my teaching and professional life. At every conference, I attend sessions that change my lesson plans for the better. I learn about new technology, teaching strategies and information.   Without fail, I come home and spread the word to other teachers in my district and state. I have presented information that I learned at NCGE at our Southern Nevada Council for the Social Studies conference for the past several years. That exposure is one of the reasons I was elected President of the Southern Nevada Council for Social Studies in March of 2016. Another opportunity that entered my life due to GAIN and NCGE was my chance to travel to South Korea in the summer of 2015 to speak at the 6th Annual Conference on Geographic Naming. The delegation was made up of AP Human Geography teachers, many of whom are also NCGE members.

NCGE has been so valuable that I am now consistently working to convince more of my colleagues to attend. On a regular basis, I bring up the importance of the connections and information. I lend them issues of “The Geography Teacher,” or tell them about lessons I read about in NCGE journals.  I send them links to information I learned about from NCGE emails and webinars. My hard work is starting to pay off, and this year, several of my fellow teachers will be joining me in Tampa.

Because of my involvement with NCGE and GAIN, I have been able to make progress on that childhood dream to go everywhere in this small world. I’ve been trapped in the basement of a pub in London due to a car bomb. I’ve been stuck on the roof of the Vatican, with a broken ankle. I’ve fallen into a hedgerow in Devon, England, and visited the ER in Dhahran, Saudi Arabia. I bought jewelry while hanging out of a train window in Peru, and purchased art from a street vendor in Scotland. Last summer, I explored South Korea and later visited the White House. I’ve shepherded students through Florence, Paris, Germany, and Australia. I have hosted teachers from Russia, Poland and England in my home because of connections made through GAIN and NCGE.  I know there are more adventures and friends to be had.

Sometimes I wonder why I teach. It is tough work, and the pay isn’t all that wonderful.  At the end of this school year, a student said something to me that reminded me why I teach this class. “Ms. Bash, at the start of school, I was mad I had to take Human Geography. Now I can’t imagine my life without it. I look at the world in an entirely different way. I see connections where before I saw nothing. I see that there are no easy answers to the world’s issues, but there are answers, you just have to know how to find them. Geography teaches you how to find them. I can’t wait for college because I want to be a geographer and find ways to make the world a better place for everyday people.”  It made me cry.  Geography makes a difference.