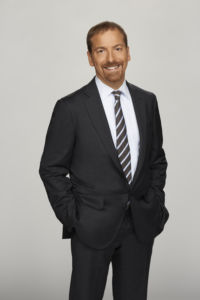 Chuck Todd, NBC News political director and moderator of “Meet the Press,” spearheads the network’s premier political coverage, offering his sharp analysis and translation of Beltway politics across all platforms—zeroing in on what really matters in Washington and why. He is the moderator of the #1 most-watched Sunday public affairs program for the 2016-2017 season. In just his first year as “Meet the Press” moderator, Todd led the network broadcast’s climb to #1 from #3 in the demo most coveted by news advertisers. The success of his reign on Sundays inspired his 5 p.m. weekday show on MSNBC, “MTP Daily”. Both his cable show and his podcast (“1947: The Meet the Press Podcast”) showcase Todd’s provocative interviewing style, expanding “Meet the Press,” the longest-running show in television history, into the modern age.