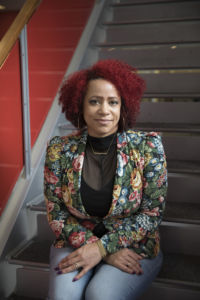 Nikole Hannah-Jones was named a MacArthur Genius for “reshaping national conversations around education reform.” This is but one honor of a growing list: she’s won a Peabody, a Polk, and, for her story on choosing a school for her daughter in a segregated city, a National Magazine Award. Most recently, she spearheaded The New York Times Magazine’s “The 1619 Project” on the history and lasting legacy of American slavery, and her powerful introductory essay was awarded the 2020 Pulitzer Prize for commentary.

Ms. Hannah-Jones covers racial injustice for The New York Times Magazine, and has spent years chronicling the way official policy has created—and maintains—racial segregation in housing and schools. Her deeply personal reports on the black experience in America offers a compelling case for greater equity. She is the creator and lead writer of The New York Times’s major multimedia initiative, “The 1619 Project.” Named for the year the first enslaved Africans arrived in America, the project features an ongoing series of essays and art on relationship between slavery and everything from social infrastructure and segregation, to music and sugar—all by Black American authors, activists, journalists and more. Ms. Hannah-Jones wrote the project’s introductory essay, which ran under the headline, “Our Democracy’s Founding Ideals Were False When They Were Written. Black Americans Have Fought to Make Them True.”