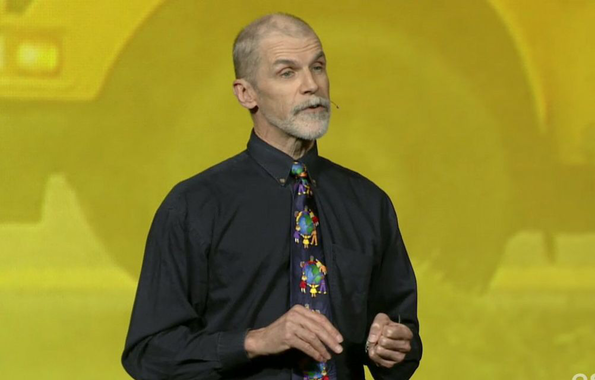 his month, NCGE is proud to honor Charlie Fitzpatrick–one of our Life Members! Charlie has been an NCGE member for almost thirty years, and has contributed greatly to the world of geography education.

Those are the bullets that most people seek when they ask about me, and each has great meaning, but other elements have shaped me in powerful ways.

I grew up in what was the rural fringe of St.Paul, MN. My parents and three older brothers and I were mostly a family of scientists; I expected to be a marine biologist (loved Cousteau, but the oceans were distant) or ichthyologist. In my first quarter at college, the biology classes were full, so I took a physical geography class and loved it (thank you, T.A. John Berquist). Next quarter was human geography; I loved it too, and switched directions. For six years, professors of geography, anthropology, and futures studies rocked my world. Toward the end of grad school, I realized my future was in education (like my mother and all three brothers), so I began a certification program, but interrupted it to take a job where I was student teaching…my old school.

My teaching mentor (Joanna Victor) was a quietly stellar coach of the craft of teaching, the arena of social studies, and life in general. Watching her teach, deal with kids as people, with routine as a chance for creativity, with groups as exercises in democracy, and with every situation as deserving analysis and holistic understanding, my views of the world and my role in it “fractalized.” One phrase stuck with me: “We sometimes teach least well that which we enjoy most, because we are enamored with things that not everyone enjoys as much.” I learned to focus on key elements.

I had grown up navigationally challenged and nearly incapable of “big pictures.” The world seemed an infinite collection of random details. Studying geography helped me start to see patterns, relationships, and systems. But it was still hard, and I was always “the odd little geographer.”

My life changed in 1986, at a summer institute at Macalester College. Geography professor David Lanegran helped 30 of us see more easily and, more importantly, share with pride the magic of patterns and relationships we saw everywhere. Teacher Jim Hanson introduced us to AppleWorks, and what could be done with an Apple IIe and simple databases. It was as if two people had taken the brakes off what I could do and given me glasses so I could see.

The ’86 institute clarified my direction, and a 1987 National Geographic Summer Institute lit booster rockets. The next several years were a blur of classes, computers, databases, telecommunication, and teacher PD events.

I learned about NCGE in 1987, joined, and discovered a bank of remarkable folks to learn from and share with. Buried treasure! A whole organization of people who saw the world with a geographic eye, and wanted to share it. The conference quickly became an annual highlight, where educators from grad school down into grade school all shared their expertise and valued each other’s, whether it was about urbanization, or how to classify data, or making dough maps, or using brightly colored yarn to show community connections. I learned more ways to integrate knowledge by doing, more teaching styles, more great ways to teach critical content, but also saw more people struggling with computers and hungering for maps that could adequately represent the complex fabric of the world.

In 1989, George Dailey, then at the Census Bureau, came to the NGS SGI and rocked my world with multi-scale and multi-variable data. Listening to him, I scrapped my annual plan (already in place) to change my classes around so we could handle a school census in spring – 80 kids managing 75 variables about 500 kids. But still, making maps remained tedious.

In spring of 1992, AAG was in San Diego, and I was on a team working on the NAEP Framework. In the exhibit hall, I saw a beta version of ArcView 1.0 for Windows. Think, point, click, map. “My god! This is exactly what I need in class!” I drove to Redlands, met Jack Dangermond, interviewed for a position being created, and began working at Esri on June 1. I fell behind by lunchtime, and have been racing to catch up ever since. Devices, software, and data have evolved radically, but it’s been 22+ years of helping learners grasp why and how to analyze data, understand the world, and solve problems, by thinking geographically, using GIS.

Geographic thinking has never been more important. We face a swarm of issues, of staggering complexity. The world needs people disposed to learning, who seek holistic understanding and care about the future. We need tools which help us see the big picture, from many perspectives, including the relationships within and between elements, groups, regions, layers. We must learn anew how to learn, how to share, and how to see through the eyes of others, and it must become habit from a young age. Technology is bringing wonders ever more swiftly. Educators need to harness these new powers and opportunities, and share them with the world.

In May of 2014, Esri launched an effort in support of ConnectED. We want every school in the country to have full-power web-based GIS, with which to learn and share, for free. This is our Sputnik moment; we are making a commitment. We need geographers young and old to help learners young and old to think, point, click, map. We need students, employees, and citizens to understand and ask geographic questions, know how to turn data into information, combine disparate elements into broad knowledge, and share, so all may act with wisdom.

This is what wakes me up early, fills my day, and floats in my dreams — the urgency to share our special view of conditions. It’s why the most important map in my world is http://esriurl.com/usk12gis.