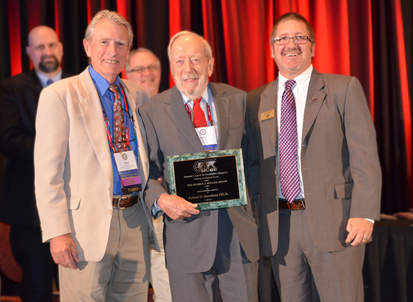 This month, NCGE is proud to honor Dr. Robert N. Saveland–our longest standing member! Dr. Saveland has been an NCGE member for more than 60 years. He has served NCGE as a member of the Publications Policy Committee, and has been a regular participant and attendee at our annual conferences. His articles and book reviews have been published in the Journal of Geography, and his book chapters have appeared in other NCGE publications. Dr. Saveland received the George J.  Miller Award (the highest honor bestowed by NCGE) at the 2012 National Conference on Geography Education (in San Marco, Texas), in recognition of his distinguished record of service to geography education.

Dr. Saveland began his teaching career as a seventh and tenth grade geography teacher at a junior/senior high school in Kirkwood, Missouri, following World War II. As Dr. Saveland recalls, “By the summer of 1945 the war in Europe ended, the ship was back in the U.S. I married Gladys, my Washington University sweetheart, in St. Louis in August at the end of a 30 day leave. We were sitting in a Manhattan restaurant in New York City when the announcement came over the radio that the Japanese had surrendered. Everyone in the place, including the work staff, got up and walked down to Times Square. Gladys had to return to St. Louis because she was under contract to teach mathematics in a suburban high school. Since I would soon be released by the Navy, and the ship was in New York, I went up to 120th St. and entered a Master’s Program at Teachers College, Columbia. By doing a spring semester, pre and post summer sessions, I completed a master’s degree in 10 months. I also had a job lined up to teach in Kirkwood, MO, a suburb of St. Louis. The major catch was, although I had a license to teach social studies in Missouri, I was going to be teaching geography in the 7th and 10th grades, and I had not had a geography course since 8th grade in Miss Hyland’s class at Harding Jr. High in Lakewood, Ohio! I hurriedly enrolled in the post summer geography course being taught by Dick Tuthill, later at Duke. The first year teaching, we were using the Bradley World Geography, published by Ginn. At that time, I Iearned (along with the students) the significance of Geography.” Despite not having had a geography course in years, Dr. Saveland (along with his fellow Navy cohorts) would stave off boredom while at sea by sitting around drawing freehand maps (and conducting related competitions).

After two years of teaching at Kirkwood, the school principal offered Dr. Saveland good advice, “Go sit at the feet of the Great.” With the encouragement of his wife Gladys, who had just given birth to their first child, they took off together for a year and a summer living in a married student apartment at Teachers College, Columbia.  The professor and mentor that had the most lasting and profound impact upon him was George Renner, a well-known writer of books on Air-Age Education. Dr. Saveland felt in sync with him, and found his lectures to be extremely interesting, thereby gravitating towards him, while the more traditional geographers were less enamored by Renner. For his dissertation, Dr. Saveland wrote Geography of Missouri for the lower middle grades, which was tested in the classrooms. After completing his coursework for his doctorate, Dr. Saveland went back to St. Louis as a Supervisor of Social Studies, teaching a Methods course at Harris Teachers College in the morning, and evaluating elementary schools the rest of the day. During the summers, he worked writing maps and geography programs for the new St. Louis educational FM radio station. During this time, the St. Louis schools were being integrated. Harris Teachers College and Stowe Teachers College became one.

Dr. Saveland feels that the most significant work of his career occurred when he was with Ginn and Company, from 1954 until 1968. During that time, he worked on a successful, groundbreaking series, Lands and Peoples of the World. It was revolutionary in that it provided a new perspective, cartographically depicting the world in ways in which it had never been seen before. In 1968, he moved to Georgia and became a professor in the Department of Social Science Education at the University of Georgia’s College of Education.

Much akin to his Viking ancestors, Dr. Saveland is an adventurer, with a great love of sailing (and boats). He is 94 years old, and has an unparalleled zest for life; as he has said, he “doesn’t take any medications—and a cane would just get in my way!” He has a new car (that he got last January) that he has already put 22,000 miles on. If he is traveling domestically, he only travels by car…and traveling often, he most certainly does! He attends several different annual conferences. As a geographer, he feels as if it is of great interest and a delight to experience places more intimately while driving, rather than flying. He is looking forward to attending the special upcoming 2015 National Conference on Geography Education, and has loved attending NCGE conferences (along with other conferences) over the years, as he appreciates all of the invaluable networking opportunities, and feels enriched by all of the people that he crosses paths with. “They add richness and depth to your life; everyone has something new to teach you…they expand your horizon, broadening your world a little wider….if you are receptive and open, you can learn about something you never knew. Everyone has something to offer and teach you, which enables you to see things in a new light.”

Dr. Saveland’s varied teaching and curriculum design experiences have provided him with keen insight into best practices in geographic education. He is a strong proponent of field trips, which allow students to be actively engaged exploring, making learning a more memorable experience. He also encourages teachers to use in depth detail and description in their teaching. “It adds color and life to a story, thereby adding interest and better engaging students. You lose so much if you omit it.” He also feels that teachers should integrate audio/visual elements when teaching about other environments and regions. “A good teacher should bring a great breadth and depth of understanding—they should infuse their curricula with life, so that students can feel as if they are experiencing different places and regions vicariously, and fully understand ideas and concepts.”

Dr. Saveland attributes his insatiable curiosity to his youthful spirit, which continuously keeps him active and engaged. He is most certainly an inspiring, resilient spirit, and we are ever so grateful that Dr. Saveland has allowed NCGE to share several adventures with him along the way! We are fortunate to have him as an NCGE member, as he has contributed so much to the geographic education community over the years.