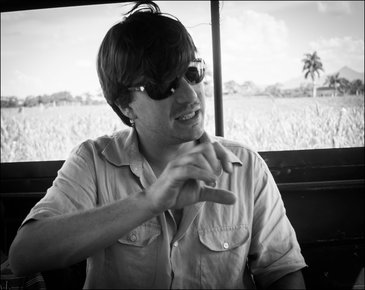 This quote, in an 1844 letter from Karl Marx to Arnold Ruge, informs my approach to geography education more than anything else. In its original context, this quote was about the difficulties of social change; the idea that, according to geographer David Harvey, “we can approach the construction of a new world through a ruthless criticism of the ideas and realities that constitute the old.”

It seems to me, though, that the basic idea encapsulated in this quote is much more broadly applicable, especially to geographic education. This quote reminds me of the necessity of remaining skeptical about the way the world seems to simply exist in a particular social and spatial order. As geographers and geographic educators, our goal should be to demystify that which seems natural, to denaturalize that which seems to be just the way it is. Our goal should be not to simply describe the world, but to understand the social, cultural, economic, and political processes that bring it into being in one particular way rather than in infinite other possible ways. That is, our goal should be to mount, together with our students, a ruthless criticism of the existing socio-geographical world, to ask not just how (and where) things are, but why things are the way they are, how they got to be that way, and if that’s the way they should be.

As a cultural geographer and geography educator, especially one who is a “stand-alone” geographer teaching exclusively non-geography majors, many of whom are enrolled in my university’s five-year BA/MA teaching program, I have found that the cultural landscape is a particularly powerful place where I’m able to simultaneously teach human geography and enable and empower students to engage in this kind of criticism. Key to this pedagogical approach is providing students with the analytical tools to think critically about the cultural landscape, both in terms of how it is produced and how the landscape itself actually plays an important role in shaping our understandings of places at all geographical scales. For students of all majors, focusing on cultural landscapes constitutes an active engagement with our everyday geographies and an unpacking and deconstruction of the world that we create, upon and within which we exist, and indeed that shapes us.

Though it may seem rather straightforward, the cultural landscape is not simply an innocent, objective cultural representation in the land (our “unwitting autobiography,” as geographer Pierce Lewis referred to it). Rather, the landscape is the physical manifestation of social struggles as they play out in place. And what’s more, in the words of geographer Don Mitchell, the cultural landscape does work, it occludes those social struggles that produce it in the first place, making both the produced landscape, and the social divisions themselves, seem natural. In this way, all kinds of socially produced divisions—race, class, gender, sexuality, nationality—are manifested, made physical, made real, and made natural in the cultural landscape.

In my experience, rather than being needlessly academic or abstract, I’ve found that using this approach to the cultural landscape is highly effective in getting all kinds of students to engage in just the kind of ruthless criticism that I think is so necessary in geography education.

For example, I recently led a Virginia Geographic Alliance-sponsored workshop with pre- and in-service social studies teachers from around the state of Virginia broadly focusing on the connections between race and cultural landscapes. The goal of the workshop was simple: to get participants to think about, to study, to see how race and the history of race in the U.S. plays out in the cultural landscape. The centerpiece of the workshop was half-day field trip and guided tour of Colonial Williamsburg. During one of the early stops on the guided tour we walked the perimeter of the Governor’s Palace, passing through a garden and coming upon a steep terraced hill leading down toward a man-made pond. The tour guide remarked aloud about the tremendous undertaking it must have been to create this recreational facility­. Can you imagine the time and effort, before tractors, to dig this massive hole? he asked. In the brief discussion that ensued between the guide and several participants about the logistics of such an earthmoving project, there was not a single mention of the enslaved labor force that actually dug that hole. As we stood there experiencing our history through this landscape, there was nothing actually in the landscape that could speak back to us about its production. It was just there: a deep hole in the ground, now mostly emptied of water and attractively covered by grass, bushes, flowers, and trees. The production of this landscape, its creation by enslaved Africans and African Americans, was completely obscured by the physical fact of the landscape many centuries later, resulting in the complete erasure of slavery from this place. Several stops later in the tour we entered the expansive early 18th century home of Peyton Randolph, his family, and his slaves. The guide explained that while the slave children who lived there would have received a basic education, their main role was to haul water for cooking and laundry. The guide pointed down the path, from the slave shack to a place down a hill and just out of sight where the slave children would have trekked many times per day to fetch water. While outwardly attempting to bring slavery into visibility in this landscape, the guide essentially used the landscape—the physical location of the water source, and the need for water dispersed throughout Colonial Williamsburg—to shift the focus away from the dehumanization of a group of people based on their race, and toward a technological issue: the distribution of water throughout the area, and a technological solution: slave children carrying water. This example, I think, shows both the complex ways in which the landscape is both produced and productive, and also how both geography educators and students can start to denaturalize all cultural landscapes as such. Indeed, without this kind of critical engagement, the landscape has the power to shape racial narratives about place, and in doing so to shape the racial narrative of the country writ large.

To think that this is just a problem of history would be misguided. One need only to look as far as the recent uprisings in Baltimore and Ferguson, to do a little research on the legal, economic, and social production of America’s racially segregated cities, and to remember that it’s not just the production of these deeply unjust landscapes, but the work that these landscapes, once produced, actually do. The landscape itself is a force in both mediating life in these spaces (for instance, leading directly to unequal economic, educational, and health outcomes) and in occluding the very nature of their production and thus naturalizing these American ghettos as just the way it is.

In a second example, I recently worked with three undergraduate students, all three majoring in history, on an independent research project that brought together history, gender, and the cultural landscape. As we describe in a forthcoming article in The Southeastern Geographer, statues, monuments, and memorials are part of the way we celebrate our country’s history. They are physical embodiments of local, regional, and national history cemented into the landscape. It is important to remember, however, that landscapes are not neutral; history inscribed in the landscape most often reflects those with the power to inscribe and naturalize their experience into that landscape. In using statues and other monuments to study cultural landscapes, the question is not only who is remembered and memorialized? But also: how are they remembered? who has been erased? And how do these physical monuments and statues contribute to the production of space? In our study we found that in the case of southeastern Virginia, a strong gender bias lurks in these monumental landscapes. Specifically, of the 23 statues we analyzed, only six represent women, and only two of those represented women unattached from men. In addition to women being vastly underrepresented in the landscape, we also found that the statues and monuments displayed fairly predictable representations of both masculinity and femininity. As we document, men are overwhelmingly depicted as powerful leaders and protectors of the land as their strength and intellect are literally carved into the landscape. Women, where present, are portrayed as either mythical heroines or fragile, passive subjects, and in both cases play only a secondary role in the landscape. Importantly, our argument is precisely not that these statues were individually or consciously sculpted to create, represent, or maintain blatant gender stereotypes. Rather, the cultural landscape seemingly innocently reflects broader power structures within society. And through this apparent innocence, unequal social structures are normalized and naturalized in the cultural landscape. Historian Laurel Ulrich has argued that “history is not just what happened in the past. It is what later generations choose to remember.” Through critically engaging with our local, mundane, almost unnoticed landscapes, these students began to see how the landscape allows for women’s contributions to society to be neglected, even erased from the places we inhabit.

It’d be dangerous to dismiss the importance of these memorial and monumental landscapes. Recent public debates over the Confederate battle flag and other symbols of the Confederacy have shown us how much symbols of the past really matter in the present. As a recent report from the Equal Justice Initiative argues, “the Southern landscape is cluttered with plaques, statues, and monuments that record, celebrate, and lionize generations of American defenders of white supremacy, including public officials and private citizens who perpetrated violent crimes against black citizens during the era of racial terror.” But there are no signs of the nearly 4,000 lynchings that occurred in the American South between the end of Reconstruction and 1950. The report goes on, “the absence of a prominent public memorial acknowledging racial terrorism is a powerful statement about our failure to value the African Americans who were killed or gravely wounded in this brutal campaign of racial violence.” Indeed, who is remembered through the landscape? And who is erased?

In the end, I believe that one of the most important things that we can do as geography educators is provide students with the intellectual tools to destabilize their notions of the fixity of our social and geographical existence, to destabilize the seemingly natural, universal ground upon which we all stand. That is precisely the reason for the ruthless criticism of everything existing. And the geography classroom is a perfect place to start.