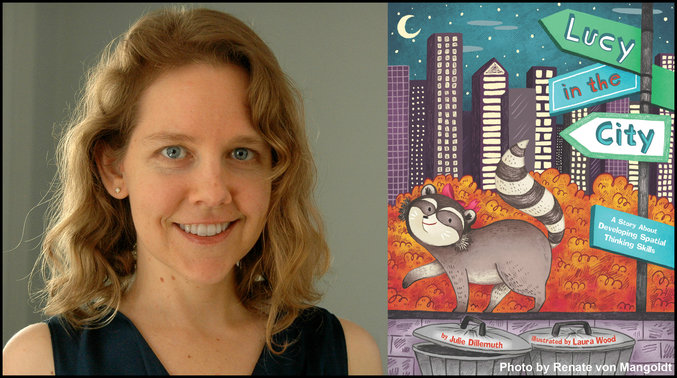 My first encounter with the NCGE was visiting the website to order The People’s Guide to Spatial Thinking by Diana Stuart Sinton, Sarah Bednarz, Phil Gersmehl, Robert Kolvoord, and David Uttal. I poked around the site and realized that this was a professional society I needed to join!

I am a children’s author, and one of my goals is to fill a neglected but critical niche in the children’s book market: picture books with spatial themes. It’s an alternative career for a geography PhD for sure, but now, nearly six years in, I couldn’t imagine doing anything else. I’m thrilled to announce that my debut picture book just came out! Lucy in the City: A Story About Developing Spatial Thinking Skills is for 4- to 8- year-olds, published by Magination Press (see more at http://www.apa.org/pubs/magination/441B170.aspx#. There is a free K-3 Teacher’s Guide, too!).

As a geographer, my area of expertise is spatial cognition, or how we understand the world around us and use concepts of space for problem solving. It wasn’t until graduate school that I even learned that cognitive and behavioral geography was a field within the discipline. Yet people spend a great deal of their day thinking spatially and using spatial skills, consciously or not. Without spatial awareness we wouldn’t be able to navigate our toothbrush around our mouth or our car around town, pack a suitcase or backpack so that everything fits, sketch a map or a diagram, move a couch through a doorway, or communicate with spatial language and metaphors. Some activities that call upon spatial thinking skills we can do easily without a second thought, but others — that couch defying the doorway, the map or diagram worth a thousand words — can be more of a challenge; frustratingly so for some people.

As seems to be the case for many NCGE members, I wasn’t a geographer from the get-go. I found my way to geography through archaeology. I went to Yale University for a BA in archaeological studies, and became interested in landscapes and landforms, where people chose to live and why, and using satellite imagery and GIS as tools to learn more about people’s relationship to their environments. I absolutely loved archaeology: the thrill of digging, in all its painstaking detail, site mapping, analyzing artifacts. There was just one problem, for me: the lack of certainty that comes with interpreting the surviving clues from past people and cultures. I could never truly know what had happened at a site, what life had been like there in ancient or even historic times, especially since my interpretations came through the lens of my own time and place. As somebody who had always been plagued with perfectionistic tendencies, this aspect of studying the past troubled me.

Enter geography. I was happy to discover that as a geographer I would be able to ask those same interesting questions about people and their relationship with the earth: the landscape, resources, significant places, but in the present time, with living people. Empirical evidence! (Which, yes, still involves interpretation, but not to the same degree.)

I headed to graduate school at the University of California, Santa Barbara. Although I thought I might study how sand moves along the Pacific coast and how people interfere with that, Keith Clarke got me interested in cartography, Dan Montello, Reg Golledge, and Mary Hegarty got me thinking about spatial cognition, and an exciting National Science Foundation IGERT Fellowship with a media arts and technology theme had me considering a context of new technologies. These interests triangulated to a research focus on how people read and use digital maps for navigation. I incorporated my curiosity about imagery and GIS in testing imagery-as-maps (aerial photos) versus traditional maps for my master’s thesis. For my dissertation, I investigated how people deal with maps for decision-making and wayfinding when they are on the small displays of cell phones or GPS devices.

Part of my research involved how people learn an environment, or make mental maps, and that extended to an interest in how spatial skills develop. I was impressed reading about experiments that tested infants’ and children’s spatial thinking, including research that considered exposure to spatial concepts and language (check out the Spatial Intelligence and Learning Center SILC (http://spatiallearning.org/) for a wealth of information in this area). I also learned that most children are not formally taught spatial thinking concepts, and even worse, can pick up “spatial anxiety” from a parent or teacher who doesn’t feel confident in his or her spatial abilities. Early experiences, or lack thereof, with spatial concepts and language can impact math and science learning later in school, and even play a role in a person’s career choice.

In 2009, a year after completing my PhD, I got the idea of writing a rhyming story for kids that would have spatial language in every sentence. It was about a day in the life of a baby, and I thought that through repeated readings parents might memorize some of the short, rhyming couplets and recite them to their child during daily activities, thereby increasing children’s exposure to spatial language. I started scribbling in a notebook, having fun coming up with rhymes and taking my character through her day with an abundance of prepositions and other positional words.

I had always wanted to write, but had never gotten very far with the bits of novels and screenplays I had started at various points in my life, and it had never crossed my mind to consider a career in writing. But suddenly, this story just flowed out of my head, beginning to end. Then it occurred to me: what if I could help lay the foundations for spatial thinking skills in kids through fun, engaging stories? In writing for children, picture books in particular, I discovered a genre that really clicked with me – short manuscripts (average is 500 words) and straightforward plots (not as complicated as novels). Soon I had more story ideas, and the more I wrote, the more I enjoyed it; although the more I investigated the industry and how to get published, the more I realized how much I had to learn and how grueling the process could be. But I was ready to get serious about writing. I joined the Society of Children’s Book Writers and Illustrators (SCBWI), and started learning about the craft of writing for children and about the publishing industry. I finally felt that this was what I wanted to spend the rest of my career-life doing. Around the same time, I attended a talk by David Uttal (Professor at Northwestern Univ. and SILC researcher), who presented evidence that spatial skills can be taught and can improve with training. So my books could potentially make a difference!

In 2011 I became a mom, which gave me the courage to quit my job to be home with our baby and to focus on my writing. In 2012, I submitted a story to the Highlights Magazine Fiction Contest, and I was stunned and overjoyed to get a phone call a few months later telling me I won! More valuable than the cash prize and engraved bowl was the confidence boost and validation that came with seeing my story in print. I was a writer. I could write stories. Award-winning stories! This could be a viable career.

The following year, spatial development expert Nora Newcombe (Professor at Temple Univ. and SILC Principal Investigator) visited Santa Barbara and I met with her to talk about spatial themes for picture books. She loved my ideas and suggested that Magination Press, the children’s division of American Psychological Association (APA) Publishing, might be a good fit for my stories. I wasn’t so sure, from seeing all the books on their list about clinical psychological issues. But Nora knew an editor on the academic publishing side and offered to ask about a contact person at Magination and whether they might be interested in stories that supported children’s cognitive development. That set in motion the dream-come-true chain of events that led to my book, Lucy in the City, hitting bookshelves two years later. Lesson learned: you never know until you ask!

I hope Lucy will be my first book of many. And I hope it will make a difference in promoting awareness about what spatial thinking is and why it’s important to encourage kids to think spatially.